A Happy New Year to you all, and I thought I would start the New Year with a fresh look at an old favourite of mine, Resident Evil 3: Nemesis. I actually spent a large chunk of my spare time over Christmas playing through the game (again), so that I could finally fully complete it – a feat that has taken me the modest period of a mere fifteen years…

Through the late-1990’s Resident Evil was fast becoming one of the most anticipated series on home-consoles. The zombie and mutant infested tales of Raccoon City’s legendary Special Tactics and Rescue Service’s fight against the corrupt Umbrella Corporation were gripping gamers everywhere. While recent entries from Capcom have divided opinion starkly among fans, between 1996 and 2000 four Resident Evil games were launched, and all were well received, firmly establishing the “survival horror” genre.

RE3 is set around the events of Resident Evil 2, and sees you picking up control of S.T.A.R.S member Jill Valentine as she tries to escape the now zombie infested Raccoon City. The game essentially splits its story into two parts – action set before the events of RE2, and then action set immediately after RE2. However, throughout both segments you will encounter the infamous Nemesis – a bio-engineered assassin from Umbrella who will stop at nothing until all S.T.A.R.S members are eliminated.

Along the way you will meet up with Carlos, a member of Umbrella’s Biohazard Countermeasure Service – a team of ex-mercernaries Umbrella has assembled under the guise of an evacuation force for the remaining human survivors of Raccoon City. Not that you’ll come across many survivors. Zombies are now the primary inhabitants of Raccoon City’s streets; and you’ll also come across the familiar giant spiders, zombie dogs, Hunters, and the occasional new mutant. 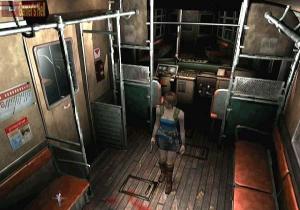 Controls are not immediately different to the previous two RE games, save for three exceptions. The first is the introduction of the “quick turn” feature. On the GameCube, simply flick the C-stick and Jill will perform a quick 180 degree turn, a move that is a god-send to improving the “tank” controls of the playable character(s). The second, more minor change, is that you now no longer have to press the action button to climb stairs – you do so automatically on approach. The third feature is a “dodge” manoeuvre, whereby pressing the R button just prior to attack will see you evade your attacker and allow you to ready for a counter attack.

The “quick turn” and climb features make the controls a lot smoother over the previous two games, however, the “dodge” feature can be a bit hit and miss, and I certainly wouldn’t rely on it to survive any given situation.

Another new element to the game is the ability to craft ammunition. Using various gun powders found around the game areas, you can create everything from regular bullets to explosive incendiary grenades and high-powered magnum ammo. Additional weapons do still need to be sought out, and you will only start the game with the standard hand gun. If you’re brave enough to take on Nemesis at the points he attacks you, and you put him down (temporarily though that will be), he will reward you with some pretty helpful weapon upgrades. Whereas ammunition conservation was very much the order of the day in previous outings, RE3 does all it can to insure you’ve got the tools to complete your mission. 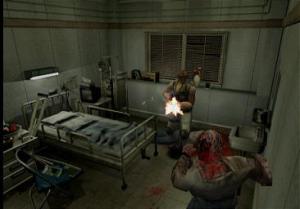 Graphically I don’t feel the game has aged too badly considering this title is sixteen years old now. The pre-rendered backgrounds do their job, and the character graphics are pretty good for a game developed for 32-Bit hardware. I’ve certainly experienced worse (I recently took a look back at Tomb Raider 2 on PSN, and the graphics are horrible). The animated cut scenes are showing their age somewhat, but given the original hardware specs the game was designed to run on, they’re still watchable.

The scripting is as cheesy as ever, but it wouldn’t be a proper Resident Evil game without a good dollop of cheese laden dialogue. Music is good, sets the atmosphere well, but is fairly unmemorable, while the sound effects do their job.

Despite its relatively short length, (once you’re familiar with the game, it can be easily completed in under 4 hours), there is stacks of replay value. There are in-game extras to be unlocked when certain criteria are met, a challenging set of Mercenaries campaigns, and the game will rank you on your performance (based on completion time and in-game decisions taken); and there are multiple ways you can tackle in-game decisions and routes to completion. There’s also plenty of stuff hidden around the city to find if you’re inclined to look – it’ll certainly take a few play throughs before you find everything Capcom has thrown in. For fans of the series there are also eight different epilogue endings, each one giving a brief update on individual characters from the Resident Evil series helping to pre-empt the story lines for Code:Veronica and RE4.

I have been a big Resident Evil fan since the launch of the original on the Sony PlayStation, and while the first game and sequel always seem to be fondly remembered, there never seems to be much time given to the third instalment. Perhaps its release was slightly overshadowed by the (then) prospect of Resident Evil: Code: Veronica on Dreamcast, but for me it is a worthy edition to the series and still seriously good fun to play. For those who prefer their zombie action over the puzzle elements and slightly slower pace of the previous games, then Resident Evil 3: Nemesis is a real treat.