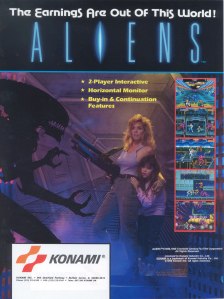 Over the last twenty years Twentieth Century Fox’s Aliens franchise has become a much sought after commodity in the gaming world, with some of the games released bearing the brand name polarizing feelings amongst gamers and hardcore fans of David Cameron and Ridley Scott’s cinematic visions. Obviously, from a pure action perspective, it has been Cameron’s 1986 blockbuster Aliens that most developers have sourced inspiration from in bringing the franchise to our homes, in an effort to not only scare us witless, but to also give us the satisfying opportunity of unloading heavy artillery into marauding hordes of hostile xenomorphs.

I have to say I am a big admirer of both Alien and Aliens, and have always looked forward to playing a game based on the series, and have been fortunate enough to play the many of these titles over the years, some of which I will revisit for the purposes of this blog. Around the time of Aliens original cinematic release in 1986 there were two games, both published by Electric Dreams, that tied in to the film; one of which was a rather tense first person view affair, and the other a rather crude looking top-down game which I have yet to have the pleasure of playing, but I recall the press at the time lauding it as the better game (it tended to be referred to as Aliens: US Edition for reasons that escape me now).

Konami’s Aliens was the first foray into the arcades for the franchise, and was also pretty faithful, in setting, to the film. Split over six levels, you take control of Ripley, fighting through waves of Alien’s, armed with your trusty Smartgun until you reach your final battle against the Queen Alien on-board the Sulaco. A simultaneous two player option is also available, whereby Player Two picks up control of one of the marines, presumably as Hicks – the characters names are never mentioned and the likenesses are altered from those of the original actors.

The level settings are faithful to the film, are well drawn, and recreate many locations that will be instantly recognisable to fans of the movie. The Alien’s are well animated and Konami do a good job of creating some additional Alien foes not seen in the films, but which clearly add much needed variety to the proceedings here. Some fans may take exception with the artistic licence Konami took with these enemies that are not true and accurate to the film, but to be fair to Konami, the game would be pretty dull if you just shot at wave upon wave of Alien drones. Fans should take delight in the appearance of the Power-Loader, including a final battle with the Alien Queen (should you get that far) that pays excellent homage to the original movie.
The sound effects are spot-on, with Alien screeches and Smartgun sounds all recreated perfectly from the source material, and although the music used is not ripped from James Horner’s brilliant film score, it fits in with the action nicely – the opening sequence at North Lock features a great composition that really sets up the entire game.

The game is challenging, even when set to “Easy”, and although not quite what I would class as a “quarter-muncher”, it does takes practice to get really good at it, which isn’t a bad thing of course as it brings you back for more plays! As with Konami’s Teenage Mutant Ninja Turtles, opportunities to grab items to replenish energy are considerably few and far between, meaning any carelessness will usually be punished with loss of a life. Along the way you will come across cases that will spill out weapon power-ups, however, if you die you will lose your power-up and revert back to the default Smartgun. The Smartgun is fine against most standard enemies but will make tougher opposition all the more challenging to overcome. The game play is very old school, and unless you grew up with this style of side-scrolling action game, or have got into them at a later date, I would imagine that gamers used to modern gameplay mechanics would find it a chore to play through.

The JAMMA PCB is getting much less common now than it was a few years ago, and the version to buy is the board with the World ROM set. There is a board with a Japanese specific ROM set but it omits parts of the game – namely the sections where you ride in the APC. The great shame is, of course, that Konami never ported Aliens to home hardware. My hopes of a home port were raised when both The Simpsons and Teenage Mutant Ninja Turtles received ports to XBLA / PSN download services in recent years, but as yet, no sign of Aliens. As the current video game licence holder is Sega, it is unlikely we will see a port anytime soon, and if Fox want big money to award Konami the licence again, it will not be economical to port. Nevertheless, for those who do not have a Supergun or home arcade set up, both ROM sets were dumped on MAME many years ago, and so can be easily accessed for those who want to.

Aliens is a great example of early-90’s scrolling arcade run-and-gun games with big bold sprites, a range of weapons and atmospheric music.  The game is, for whatever reason, one of the few stand-out memories I have of playing video games in arcades when I was on holiday as a kid; and it was also the first arcade game I ever completed… and it wasn’t cheap to do it either!
No self-respecting Aliens video game fan should live their life without trying Konami’s take on the franchise at least once, and for me it will always hold heady memories of family summer holidays, sea-front arcades, and a fistful of ten pence pieces… “Game over, man! Game over!” indeed.